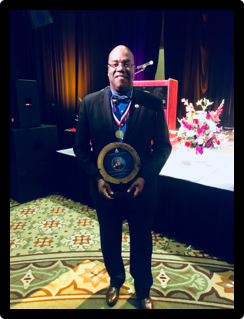 “This is one of the biggest honors of my life to receive the first Peace Prize Award in the name of this icon Danny K. Davis, a true public servant paving the way and mentoring the next generation,” says Dr. Rivers. He goes on to say, “Congressman Danny K. Davis is teaching and exemplifying ethics and integrity in the political arenas. He is a true statesman for all politicians to look up to. We still have much work to be done in the arenas of peace and diplomacy around the world. With leadership like Danny K. Davis we have a chance to make a lasting change. I also wish to thank Dr. Gladys Loggin for her help and support."

The Danny K. Davis Peace Prize Award will be a yearly award given to the top peacekeepers in the world. Dr. Rivers wishes to thank, the Multi-Ethnic Advisory Task Force for the nomination of this award. 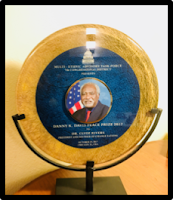 In late 2017 Ambassador Dr. Clyde Rivers won the United States President’s Lifetime Achievement Award. This is a non-political award, a peoples’ award. It was given of behalf on a grateful Nation as a ‘thank you’ for at least 4,000 hours of volunteer service given for an unparalleled commitment to improving the lives of others.

The official letter from the President’s office is quoted saying, “One of our Nation’s greatest strengths remains the compassion of our everyday citizens, who are giving willingly of themselves and their lives for the benefit of others…our Nation is proud for your commitment to this honorable tradition.” Donald Trump, President of the United States of America. Dr. Rivers was further commended for his enduring commitment to serving his community and the Nation.

Ambassador Dr. Clyde Rivers received his award on Capitol Hill in January 2018. He was grateful for the recognition of his work by the highest office in America.  He continues to work, not only in America but all over the world. He and his organization, iChange Nations™, has reached 120 nations with the culture of honor. Dr. Rivers wishes to thank Dr. Jason Renville for his efforts to make this happen.

Everywhere iChange Nations™ goes it is finding people doing good things to help mankind and people that are living the Golden Rule, “Treat others the way you want to be treated.” The combined efforts of the iChange Nations™ Honor System, the Golden Rule International Award System and other organizations and institutions they work with, have catapulted iChange Nations’™ to the top. Giving them the ability to say they are the “Largest Honoring Network Establishing Cultures of Honor in the World.” Soon to become the “World’s Strongest Voice to Help Change the Nations.”

Dr. Clyde Rivers is the Founder and President of iChange Nations™ a professional institution that builds Diplomatic Leaders by equipping, mentoring and training highly esteemed individuals who have the desire to change nations throughout the world. The organization is seeking to bring global awareness by strategically helping nations to educate, train and support the Nation Building Process designed to improve the dignity and betterment of human life. This international platform focuses on establishing effective relationships to help people understand the value of honor and basic human rights.

Honor is a catalyst to recognizing greatness in others and it promotes change in communities, regions, countries and nations. This has been witnessed by Dr. Rivers and his team every time honor is bestowed upon another human being, organization, institution or government. This honor, from the office of the President of the United States, is one such experience. It is and will touch many that share in Dr. Clyde Rivers’ passion to honor and spread the message of the Golden Rule.

The award will now be in the Library of Congress of the United States of America.
Posted by Ambassador Clyde Rivers at 10:37 PM No comments:

There was a great representation from NW Indiana. Dr. Gordon Bradshaw, one of the founders of Community Civility Counts Initiative received the iChange Nations “Pillar Award” for his continued strong support of the Global ICN Golden Rule Movement of Honor. Vincent Harlston received the ICN Christian Media of Excellence Award and Dr. Anthony Branch received an Honorary Doctorate in Letters from United Graduate College and Seminary International for his outstanding journalism.

We are witnessing great international results coming out of World Civility Day. Dr. Chuck Hughes and Dr. Gordon Bradshaw along with the Gary Indiana Chamber of Commerce, have worked together to create the Community Civility Counts Initiative and World Civility Day and appointed Dr. Clyde Rivers as the Spokesperson for World Civility Day. This award is reaching platforms of the world and iChange Nations™ is finding great people of civility to honor.

Former President of Zambia, Kenneth Kaunda, is one of the last living freedom fighter that aided Nelson Mandela in his apartheid movement in South Africa; helping him get free from prison and housing and protecting members of his political party for years. Kaunda worked in his country to unite the over 70 tribes that are united to this day. He was then first person in history awarded the prestigious ICN World Civility Award and this has set the bar high for this award.

Although unable to attend the event in Grand Rapids, Lew Bayer, CEO of Civility Experts Worldwide Inc. received the ICN World Civility Award and the highest award to-date from iChange Nations™, the Girma Wolde Giorgis Presidential Environmental Award for her work to change the environments of the world today through Civility Training, bringing solutions to a world full of incivility. Along with this award she also received the ICN World Civility Award.

“We need to brand a new kind of hero, a new role model for the people of the world to follow. If we don’t bring these great people to our global platforms to acknowledge and honor them, we have lost a huge part of legacy intended to guide and better the world. That is the reason ICN seeks out people doing great things to help the world and bestows honor upon them. We are creating a new standard and the world will follow,” says Dr. Clyde Rivers.

Dr. Charles Kinuthia in turn received the World Civility Day Award for his work in the nations to bring equity and an entrepreneurial spirit into business systems supporting World Civility globally.

The building of Cultures of Honor is one of the mainstays of iChange Nations™ global work. Dr. Donella Pitzl, ICN’s Global Director said, “Honor has a life of its own, once you bring it, it changes the atmosphere and people are empowered and encouraged to continue to do good and help mankind.”
Posted by Ambassador Clyde Rivers at 1:34 PM No comments:

Honorable Allicock was given this award for his commitment to empower the indigenous people in Guyana. He’s created an institute called Bina Hill Institute. It’s a skills development education that’s training the indigenous community in skills so they can produce jobs and make a better life for themselves and others. This is considered, by iChange Nations™, a “heroic institute” that the Honorable Sydney Allicock has put in place for his country. “The work that the Vice President of Indigenous People Affairs for Guyana, Sydney Allicock, is the type of work that is needed to help eradicate poverty from the world,” says Dr. Clyde Rivers.

Dr. Rivers continued to say, “To have such a leader in the country of Guyana and the world that is caring for the next generations is deserving of special recognition. iChange Nations™ has seen the fruit of this man’s labors for his country and believes he is worthy of being recognized as the iChange Nations™ Person of the Year Award, South America.”

In addition to this prestigious award, iChange Nations™Person of the Year Award, South America Honorable Allicock also received the iChange Nations Challenged Champions and Heroes™ Award for being a champion of the indigenous people of his nation. This award is given to men and women that are championing those with challenges in life. Rivers said, “Honorable Allicock is a strong example of a role model that is working hard to help such people in his nation and around the world by creating solutions to answer challenges.”

Golden Rule Dialogue Expert, Dr. Clyde Rivers, has put out a plea to every leader of the world. He asks, “Please, let us treat others the way we want to be treated, even as the Vice President of Guyana, Honorable Sydney Allicock, is doing for his nation and the world. We will only succeed in bringing peace and hope to this world when every individual born is able to bring their skills as a solution to the problems of the world.”

Dr. Clyde Rivers, Founder and President of iChange Nations™ said, “We have set our focus to thank the great people of the world that are preserving humanity, serving others, and making the world a better place. We had no idea how fast this Culture of Honor would grow but today we have reached 120 nations of the world through our honor systems. Everywhere we go we find people doing good things to help mankind and people that are living the Golden Rule, ‘Treat others the way you want to be treated.’ The combined efforts of the iChange Nations™ Honor System, the Golden Rule International Award System and others organizations and institutions we work with, have catapulted iChange Nations’™ Culture of Honor to the top. Giving us the ability to say we are the World’s Largest Honoring Network Establishing Cultures of Honor in the World.”

Dr. Clyde Rivers is the Founder and President of iChange Nations™ a professional institution that builds Statesmen by equipping, mentoring and training highly esteemed individuals who have the desire to change nations throughout the world. The organization is seeking to bring global awareness by strategically helping nations to educate, train and support the Nation Building Process designed to improve the dignity and betterment of human life. This international platform focuses on establishing effective relationships to help people understand the value of honor and basic human rights.
Posted by Ambassador Clyde Rivers at 2:16 PM 1 comment: